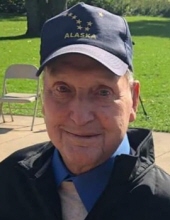 James Richard Anderson, passed away peacefully in his home surrounded by his loved ones on December 28th, 2019, at the age of 86 years, eight months, and nine days.

He was born April 21, 1933, in Lake Benton, MN to Elmer and Margaret Anderson. Jim was the oldest of three children, followed by Donna and Charles. Jim grew up with a great appreciation for the outdoors and graduated from Lake Benton High School in 1951 before enlisting in the United States Army. Soon after enlisting, he was stationed in Europe, resulting in three years serving his country in Germany and England during the Korean War. Jim took advantage of any given leave during his service to travel Europe, with his only communication back home during this time in the form of written letters to his family.

Upon returning home to Lake Benton in 1956, Jim met his life-long sweetheart, Margret Persoon. The two were joined in marriage in April of 1957, and spent over 62 years loving each other. As Jim liked to say, “more than 60 years with the same woman, can you believe it?!”—but anyone who knew Jim knows that no one else could have kept up with him (or kept him in line!) as well as Margret did, and no one could have loved Margret as much as Jim did.

The two were blessed with four children, Cindy, Richard, Deborah, and Susan. Jim’s value of a strong work ethic showed in his years of service at Hick’s Oil in Pipestone from 1957, until his retirement in 1995. When he wasn’t working, Jim dedicated time to his passion for the outdoors and his family. He spent many seasons on Lake Benton fishing or in the woods trapping and hunting. If he wasn’t out on an adventure with his hunting partner, Rick, he was bringing home a new pet for Sue or Deb to play with.

In addition to his appreciation for the outdoors, Jim was always connected to his roots in Lake Benton. He was an active participant in his community, whether it was serving smoked bullhead he prepared for Legion members following the Saddle Horse Holiday Parade or “adopting” grandkids in the neighborhood from his front porch. If something was going on in or around town, Jim would be one of the first to know—especially if it involved a good story or a decent fishing report. If the listener stuck around, they might have heard Jim tell the story to a new audience, but this time, the fish suddenly grew in size. If you listened close enough to a Jim story, you either learned a lesson about life or ended up laughing—his best stories had both.

Jim’s knack for storytelling remains perhaps one of his grandchildren’s favorite things about him. If he wasn’t entertaining the grandkids with a (usually “tall”) tale, he was talking about his grandchildren to anyone who would listen.

Jim cherished his time with his grandchildren; whether it was testing their “eagle eye” on a drive to look at nature, or taking them out on a “wienie roast” at Hole in the Mountain park, he took every opportunity to impart wisdom and never missed a chance to tease his grandkids.

In the end, the thing Jim was most proud of was his family and the love they shared. During large family gatherings, Jim would often look at Margret with a twinkle in his bright blue eyes accompanied by a small smile and quietly say, “Can you believe we started all this?”

He might have been too humble to admit it, but to his family, this 6’4” giant with a heart of gold and wit as sharp as a tack was our hero, and he will be greatly missed.