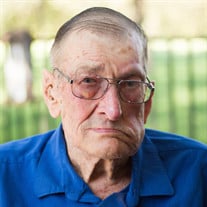 Loren E. Raddatz, age 94, of Morgan, Minnesota died on Friday, December 27, 2019 at Gil-Mor Manor Nursing Home in Morgan. Funeral Services will be held at 11 am on Friday, January 3, 2020, at St. John Lutheran Church of Morgan. Burial, with Military Honors, will follow in the St. John Cemetery of Morgan. Visitation will be held from 4 pm until 7 pm on Thursday, January 2 from the Nelson-Hillestad Funeral Home in Morgan. Visitation will continue at 10 am until 11 am on Friday, January 3, at the church.

Loren Everett Raddatz, the son of Reinhold and Cecelia (Schmidt) Raddatz, was born on April 16, 1925 in New Avon Township, Redwood County. He attended Country School District 14 and also attended high school in Wabasso. In December of 1944 Loren was inducted into the US Army. He was deployed to places like Manila and Okinawa as WWII ended. He was discharged in October 1946. Loren married Martha E. Mielke on January 28, 1948 at St. John Lutheran Church in Morgan.

Loren worked for farmers in the area after being discharged from the Army. He also worked for Supersweet Feed Company in Redwood Falls. Loren was a member of St. John Lutheran Church of Morgan where he served as Financial Secretary for a time and on various church committees. He also would help with Meals on Wheels deliveries. Loren enjoyed watching and listening to the Twins, playing cards (gin rummy, sheephead and pinochle). He enjoyed giving horse rides to his grandchildren, along with wagon rides with his team of horses in Morgan parades. He loved to train his dogs to do tricks. Loren was a member of the VFW.

Loren and Martha lived on the farm until 2013. He and Martha then moved to Gil-Mor Manor.