Funnel clouds, but no tornado or damage reported in Marshall Saturday 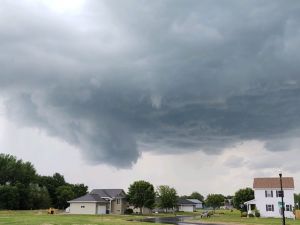 MARSHALL (KMHL) – There were a few scary moments early Saturday afternoon in Marshall. Around 1:15 p.m. weather spotters spotted a funnel cloud over the northern part of town.

That caused Lyon County emergency management to sound the tornado sirens. The funnel cloud did not touch down in or near Marshall, and there was no damage reported locally.

Had a little baby funnel right outside the front door a bit ago. That was fun.

There were reports of ¾ inch hail and wind gusts to 60 miles per hour from the same system a few minutes later near Lucan.