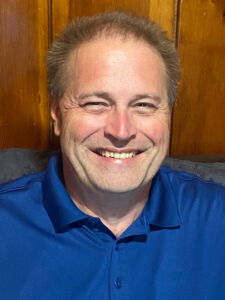 Ernest Hannes Moe was born on May 9, 1966, to parents Mathew and Linda (Gwin) Moe in Moorhead, Minnesota. He grew up in Hitterdal, Minnesota, and graduated from high school there with the class of 1984. Ernie went on to attend Moorhead State University and graduated from there in 1990.  On March 15, 1986, Ernie was united in marriage to Shelly Pinske at Trinity Lutheran Church in Twin Valley, Minnesota. The couple made their home in Moorhead where Ernie began working for UPS. In 1990, the couple relocated to Marshall for a few years and then settled in Ghent in 1993. Ernie worked for 29 years at Schwan’s before moving to Explore Data, a Solera company, where he assisted as a computer architect in the IT department.  Ernie was active at church where he assisted with projection and audio and he also volunteered and mentored students in the Marshall High School robotics program. In his spare time Ernie enjoyed deer hunting, golf, woodworking, gardening, remodeling the house, and fine-tuning his signature spaghetti sauces. Above all, he was a doting grandpa who loved his two grandchildren dearly.