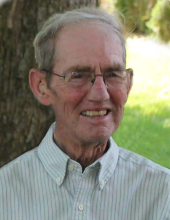 Louvaine “Sonny” Johnson was born on May 23, 1939, to Edgar and Clara (Singsaas) Johnson in Hendricks, Minnesota where he was raised and attended school. During his younger years, he enjoyed participating on the football and basketball teams. Prior to his graduation from Hendricks Public High School in 1957, Sonny joined the National Guard. He spent time in Fort Leonard Wood, Missouri for training and was later stationed at Fort Ord, California and Camp Ripley. Following his service, Sonny relocated to Richfield, Minnesota where he worked for four years laying sod and met his future bride, Barbara Warwick. The two were united in marriage on October 3, 1959 at the Gary Methodist Church in Gary, South Dakota and made their first home in Bloomington, Minnesota. Sonny and Barb relocated southwest to raise their family in Tyler, Minnesota for the next 16 years. Throughout this time, Sonny worked on a nearby farm where he gained an appreciation for the land and wildlife. He went on to spend several years as a minnow trapper. After their children had left home, Sonny and Barb relocated to Wayzata, Minnesota. Sonny began his 21-year long career as a caretaker in Minnetonka, Minnesota. On April 1, 2010, Sonny retired to his lake home on Lake Benton, Minnesota. He remained active by assisting with maintenance at Danebod Village in Tyler. The couple later returned to live in town in Tyler. On Tuesday, January 14, 2020, Sonny passed away at the Sunrise Manor in Tyler at the age of 80 years, seven months, and 22 days.

Sonny was baptized on July 3, 1939, at Lake Hendricks Lutheran Church in Hendricks and was currently a member of Danebod Lutheran Church in Tyler. He served on the church council and cemetery board. Sonny loved to enjoy the outdoors while hunting, fishing, and swimming. He was a man of many skills and talents. Sonny and Barb enjoyed traveling, especially to Arizona, Florida, Alaska and most recently in 2016 to Washington DC. Along with members of their family, Sonny and Barb visited Arlington National Cemetery to see the gravestone of his brother Ricky who was in the Navy and lost at sea in 1963. This was a very emotional and memorable event in his life. Sonny was always ready to return to his home and community where he could be found having coffee at the bank, hardware store, Danebod Village or the gas station where his grandsons worked. He will be remembered by many for his huge heart and ability to carry on a conversation with everyone he met. Above all, Sonny lived for his family and was a big supporter of both his grandchildren and great-grandchildren’s sporting events.