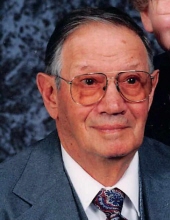 Donald Edward Crooks, age 96, of Astoria, SD, passed away Tuesday, May 4th, 2021 at Sanford Medical Center, Sioux Falls, SD.  Memorial service will be on Friday, May 14th at 10:30am at Bethel Lutheran Church in Astoria.  Visitation will be held one hour prior to the service at the church.  Houseman Funeral Home-Birk Chapel of Hendricks, MN is entrusted with the arrangements.

Donald Edward Crooks was born March 17, 1925 to Nathan and Myrtle (Maranell) Crooks on the family farm near Southerland, Iowa where he resided until 1941 when the family bought a farm near Lake Benton, MN.  Donald graduated in 1943 and worked for local farmers for a number of years. In 1947, while in Hendricks with his brother, Donald met Ruth who he then married on April 9, 1948 in the Singsaas Parsonage in Hendricks. They lived south of Lake Shaokatan, MN and in 1952 moved to a farm south of Oak Lake, SD where they lived for 9 years. In 1960 they moved north of Astoria where they continued to farm for the next 44 years. Donald helped with milking until he was 80 years old. They retired to their home in Astoria in 2004.  During their 68 years of married life together, Donald and Ruth raised five children and opened their home to many family and friends. They were proud to attend concerts and other events for their children, grandchildren, and great-grandchildren. They took many road trips and reminisced often of the places they had seen together.  Family was important to Donald, whose home continued to be a hub for his family. His many stories of life in Iowa, and his jovial laughter filled the family get-togethers. Donald was proud that he was the first in the area to have a tractor cab (one he built himself) while living near Oak Lake. He fondly recalled that had not owned his first car until after he and Ruth were married. He was quick to share the wonders of his newest kitchen gadgets, and his ever-evolving plans for his garden. Donald could often be found in his yard, where he enjoyed perfecting different gardening techniques. Known to some as the Berry King, Donald could grow ‘most anything, but most recently had poured himself into growing blackberries and strawberries.  Donald will be remembered for his joyous spirit. Laughter followed him as he shared stories of life and pearls of wisdom, and his hard work ethic and can-do attitude were appreciated by those who shared his world.

Donald is survived by his sons Michael, Lee (Donna), and Lowell (Susan) of Astoria, SD, and Dana (Nancy) of Toronto, and daughter Eileen of Astoria; grandchildren Shannon (Joan), and Sheldon (Laura) of Astoria, Allison (Chris) Bensen of Spearfish, SD, Emily, of Brookings, SD, Lindsey (Thomas) Cleberg, of Omaha, NE, Melissa Halseth of Sioux Falls, SD, and Chelsey of Astoria, SD; and great-grandchildren Katelyn, Brodey, Parker, and Ava of Astoria, Melanie Kreitlow of Aberdeen, SD, Lindsey Kreitlow of White, SD, Alaina and Makayla Bensen of Spearfish, SD, Roman and Nora Halseth of Sioux Falls, SD, and Lucy Crooks-Cleberg of Omaha, NE. He is also survived by one sister-in-law, Lois Crooks, of Lake Benton and many nieces and nephews.  He was preceded in death by his wife, Ruth, his mother Myrtle, his father Nathan; siblings Dolores (who died in infancy), Everett, Gerald, Marjorie (Showalter), Mariam (Wolf), and Richard.